The overall objective of the project Life Peat Restore is the reduction of the greenhouse gases emission of peatlands on the project sites. One of the aims of project is to contribute in significant way the halting the loss of biodiversity and degradation of ecosystem services.

Many specialized species inhabit natural peatlands, making them critical habitats for biodiversity conservation. They are the key habitats for many bird species, several of which are included in the Annex I of the European Commission Bird Directive. Several peatlands are listed internationally into Special Protection Areas.

Bird inventory was provided at Suursoo-Leidissoo project area in the 2nd and 3rd June, 2018 with the aim to recognize to which habitat types the nesting birds belong. The previously open fen area has been heavily owergrown with trees due to long lasting drainage. 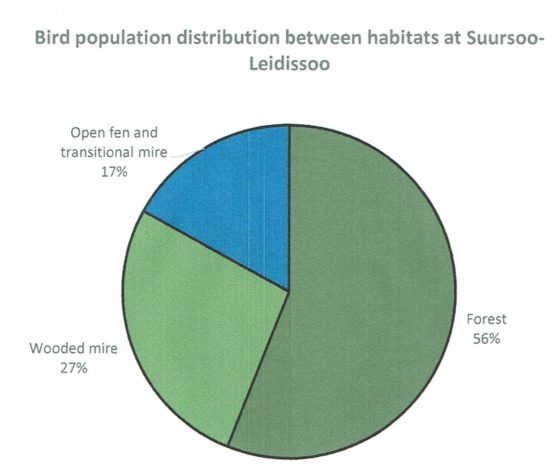 1629 pairs of nesting birds from 57 species were registered from the total monitored area (4247 ha).  Most of them (83%) were identified on forested habitats (forest and wooded mire). 665 pairs of 44 bird species were nesting on open landscape habitats (2017 ha) but most of these were species typical for wooded sites, too. Only three species of waders were identified –  common snipe Gallinago gallinago (six pairs), green sandpiper Tringa ochropus (three pairs) and  Eurasian woodcock Scolopax rusticola (two pairs). 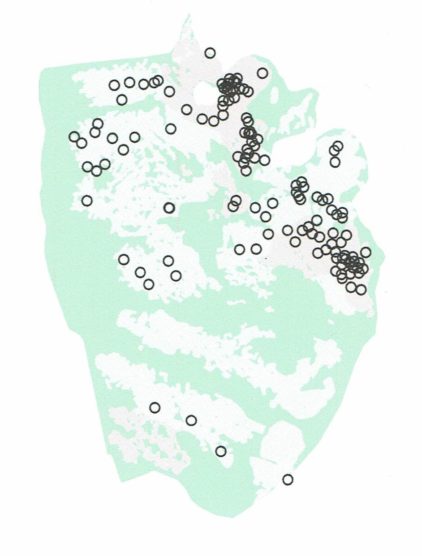 Circles on the map show the locations of nesting areas of typical fen birds, Light-coloured areas represent open landscapes (areas with no trees).

It was concluded that the bird population on the open landscape is typical for heavily degraded fens and transitional mires. For birds preferring open mire habitats less than 10% of the total project area (340 ha) is still suitable.

Restoration of mire water level during the implementation of the Life Peat Restore project habitats for valuable mire birds will be improved.