In October 18, 2017, the first steering group meeting for the site management plan of Augstroze Nature Reserve was held in Limbaži municipality. There was a variety of participants: representatives from different governmental institutions, local municipality, JSC “Latvian State Forests”, local journalist, experts involved with the elaboration of the plan and LIFE Peat Restore representatives.

The coordinator of the plan, Sandra Ikauniece, presented the results of the forest and grassland, bird and invertebrate inventories in the nature reserve. She presented also a summary of the studies of landscape and cultural heritage, which are important aspects to be included in the management plan of this area. The habitat experts, Līga Strazdiņa and Laura Grīnberga, introduced the results of mire and freshwater habitat inventories, and the project hydrologist, Oļģerts Aleksāns, presented the assessment of the hydrological situation in the bogs and the restoration options.

The nature reserve is rich in forests, including old-growth forests. There are numerous old oaks scattered in the area which are highly important for many invertebrate species, especially beetles, including Osmoderma barnabita. Several protected plant and lichen species were found in the forests, e.g. Dentaria bulbifera and Dicranum viride. In many forest compartments, there are young linden stands which, with time, can develop into biologically diverse and thus valuable forests – a rare habitat type in Latvia. The grassland areas are small (only 13 ha of protected grassland habitats were found) and in poor condition, with low species richness; this was caused by inadecuate management. 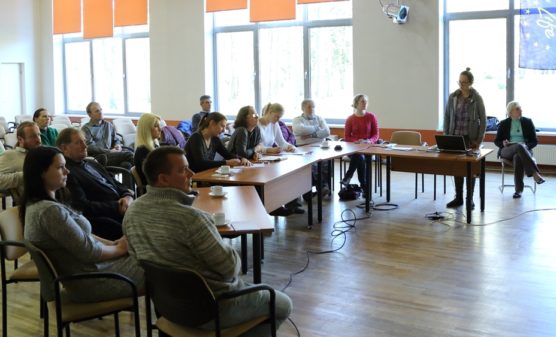 Lakes and mires in the nature reserve are of high value not only at regional, but also at national scale. Augstrozes Lielezers Lake is an excellent example of semidystrophic lakes with a high number and density of rare, protected plant species including the very rare plant Lobelia dortmanna. Similarly, Mazezers Lake is considered of high quality, though lower than that of Augstrozes Lielezers Lake. In the previous few years, the water table of Augstroze Lielezers Lake has been affected by beaver activity, however, the impact, though undesireble in terms of lake ecosystem, has not been significant.

Large areas of the nature reserve are covered by mires, most of them are excellent examples of active, untouched bogs and natural transition mires. Large open bog areas can be found, which are of particular importance for several threatened bird species, e.g. Tringa glareola, T. totanus, Pluvialis apricaria, Numenius arquata, N. phaeopus, Tetrao tetrix. The intact sections of bogs with large number of bog pools are extremely important for birds (cranes, geese) during migrations.

Although majority of mire areas are intact, the northern part of Madiešēnu Bog have been affected by drainage. The largest ditches were dug in the 1930s and 40s and do not function anymore, whereas ditches dug later are still actively draining the bog and causing its degradation. This leads to increased decomposition of peat, increased emission of greenhouse gases, decline of sphagnum mosses and enhanced overgrowing with trees. The hydrological condition of the bog and rewetting options are being studied by the project hydrologist O. Aleksāns, including field surveys, field measurements (physical properties of bog waters, e.g. pH, electric conductivity, dissolved oxygen, temperature) and use of remote sensing data and hydrolgeological modelling. In the nearest future, also wells for monitoring the water table will be established. 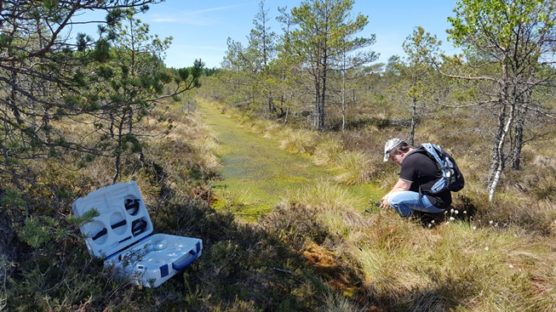 During the meeting, several questions were discussed, including those related to the history of land use which is important to understand the current situation. The coordinator of the management plan presented the work schedule of the elaboration plan and invited all stakeholders to submit opinions. The expert group will continue working on the plan until mid-December, and then it will be available for public opinions. 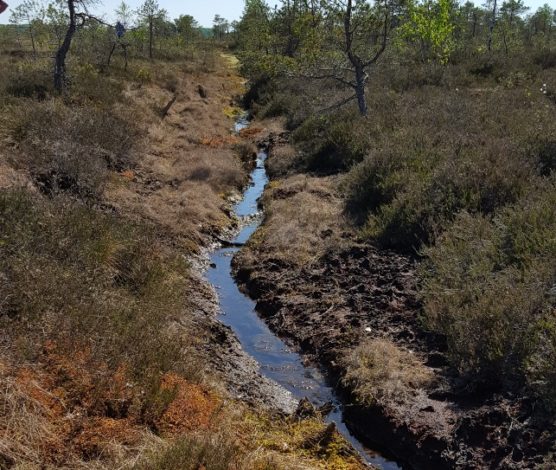